But this amount is not set to last.

Considering how much the naira fell last year, we are not sure if these figures should be a cause for delight, or a pause before alarm.

The naira has been very unstable over the years, thanks to the instability of Nigeria’s economy, and even though the CBN governor promised that this year the naira would begin to recover from February 2021, no one can really say what to expect.

The months that followed the outbreak of the Covid-19 pandemic saw the naira crashing to rock bottom.

In April 2020 alone, in the parallel market the naira fell from N428 to N450 against the dollar, falling even further to N465 in October 2020, after successive devaluations of the currency by the CBN.

All along, the naira has had occasions of sudden rises and falls, and Nigerians have learned to become accustomed with sudden news of fluctuations in the national currency, which since it’s first devaluation in 1985 has seemed to uphold a capacity to fall better than it hardly ever rises. 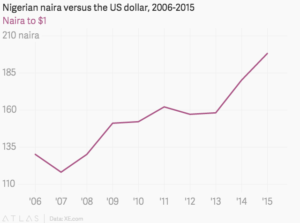 Comparing the value of fifty thousand dollars in naira ten years ago, which was then N7,725,000, anyone can clearly seen that the deep-rooted problem with Nigeria’s currency has come a long way, and promising that the naira would appreciate in value from February 2021, does not ‘relate’ with common Nigerians who know that a dollar still exchanges for close to N500 in the forex black Market.

What has influenced the rise in the dollar to naira value over the years?

Since the oil boom in the late nineties, Nigeria has had it’s economy tied to crude oil in what has turned out to be the unwisest decision ever made by the leaders of this country.

The pressured effects of the plunging oil prices on the naira has long ceased to be news.

Considering the instability of oil prices in the international market in recent years, one is left to imagine why the Nigerian economy has seemed so hard to diversify, as that would have been the most feasible solution, but for the politicization of nearly issue in Nigeria.

Over the years, Nigerian leaders have ensured that the nation’s economy hinged on mere subsistence, tagging along behind the rise and fall of the nation’s crude oil in the international market.

So even with endless talks about diversifying the economy, till date Nigeria exports mostly crude oil, but spends its hard earned foreign currencies on supplies abroad for basic items such as food, wears, electronics, and refined petrol.

In the same year, about $28.7 billion was spent on services such as professional/school fees, financial services, business travel, medical tourism, etc.

Importing practically everything, and producing little locally other than crude oil which it samples as the only major export, Nigeria has become placed in a situation where it increasingly depends on a foreign currency for its survival.

There is an ever growing need for American dollars by importers who need it to pay for goods bought abroad, causing the inevitable depreciation of Nigeria’s local currency.

How much has the Nigerian naira depreciated over the years?

The story of naira’s depreciation does not begin without reference to the first devaluation of the currency in 1986.

In September 1986, the IBB led government introduced the SFEM (Second-Tier Foreign Exchange Markey) as part of a list of IMF reforms that General Ibrahim Babangida (IBB) was forced to accept given the economic muddle Nigeria had managed to be stuck in.

Earlier in 1978, Nigeria’s economic crisis was birthed by the IMF’s Jumbo loan taken by the Obasanjo government.

The years that followed saw the nation’s crude oil being hit by a recession, amidst high ranking corruption and sabotage in the then military government.

So it happened that when the loan could not be paid off, Babaginda’s government decided upon devaluing the naira, as the only way to solve this inherited problem.

This was in line with imperative suggestions from the IMF. On the outside, Nigerians were given the impression that the devaluation was meant to usher in an era of industrialization, but even that never materialized.

It was during this time that Bureaux de change were introduced into the economy, and the problems of multiple exchange rates began underway.

With the Abacha government came the Autonomous Foreign Exchange Market (AFEM) which was introduced by the Central Bank of Nigeria (CBN) in 1995, as a way for to sell forex to end users at ‘market’ rates.

The official exchange rate then was 22 naira to a dollar. This remained the ‘official’ rate throughout Abacha’s five year regime, even though oil was selling for less than $20, and a scarcity of the dollar ensured that the foreign currency was exchanging for as high as 88 naira in the black market.

As was expected, the 22 naira exchange rate was short-lived, because the new civilian government in 1999 brought to the table the inherited issue of Nigeria’s depleting foreign reserves.

To mitigate the effects of this on the economy, the CBN under Joseph Sanusi introduced the Interbank Foreign Exchange Market (IFEM).

Within a year, the dollar was trading at 85 naira officially, and 105 naira in the black market.

Although the gap appeared to have been bridged between the official exchange rate and the black market rates, a lot of water was still under the bridge, with Nigeria struggling to pay off a $33 billion foreign debt amidst the crisis of dwindling oil prices.

As with the adage of opportunities coming once in a while, Nigeria had another opportunity at repairing a wobbling economy, when the Oil Boom started in 2003.

Oil prices began to rise steadily from around $30 per barrel till they peaked at $140 per barrel in the middle of 2008.

Then Nigeria received an $18 billion dollar debt relief from the Paris Club. People often talk about this period with relish, saying how “Nigeria was in money”.

Charles Chukwuma Soludo who was then CBN governor tried his hands at making reforms to unify the different exchange rates at the time – CBN, Interbank, Bureau de Change and wire rates.

The black market gradually “lost their market” in this period given that you could easily get forex officially from your bank without needing to go to the Bureaux de change or the black market.

Courtesy to soaring oil prices, Nigeria was awash with dollars.

It was only expected that the proceeds from the plenitude that flowed during the Oil Boom would have been saved up for when rainy days came back.

But the tap was left to run without control, and cases of money laundering amongst politicians took new and audacious dimensions.

Then the inevitable happened – oil prices started to fall from late 2008 to less than $50 by the end of the year.

But this time around, with reserves adding up to over $60 billion, Nigeria was in good shape to weather the storm when it came.

Through out Soludo’s term as governor, which ended in 2009, the naira only shifted from 127 naira to 147 naira – a rather impressive achievement – considering that he had to issue a devaluation of the naira in the bid to tail the effects of decreasing oil prices.

But even this action was unnecessary, and if he had not done so, it would have just cost Nigeria some of it reserves.

Because though oil prices recovered in coming years, the naira did not recover, as has always been the effects of currency devaluations in the country.

Further years down the line would see the naira dropping even lower to 164 naira for a dollar under Sanusi Lamido, even though oil prices witnessed a recovery between 2009 and 2014.

It is strange that during this period of time, when oil prices were high, Nigeria was not building up its reserves.

But then, it is not difficult to see where all the money went, with the height of political embezzlements that marked this period of Nigeria’s history. 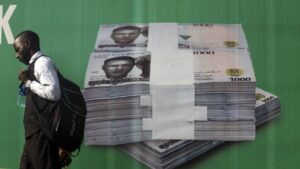 So here we are today, five years under a government which since 2015, has ushered in policies that only succeeded in compounding Nigeria’s deep rooted economic problems.

While many countries were able to pull through after COVID-19 by unleashing their reserves, the Nigerian government has succumbed to borrowing to make up for deficits, in their bid to ‘balance’ the economy.

Today, Nigeria owes over $31 billion dollars in foreign debt, while struggling with a foreign reserve that falls below $30 billion.

From all that happened to lead to this, the Nigerian government can at least learn something if they would.

Devaluing the naira will only continue to heighten Nigeria’s longstanding economic problems.

The solution is clear to see. The politicisation of the exchange rate of the naira is an unhealthy obsession in Nigeria.

This tradition has served as a motivation for politicians to harm the economy under the guise of sustaining a ‘strong’ currency, while keeping a blind eye to the arbitrage that thrives behind.

According to Abiola Rasaq, a Lagos-based financial analyst.

“The current situation of the foreign exchange market is an incentive for round-tripping, arbitrage, and rent-seeking,” he says, but also a near-term threat to average Nigerians should the Naira fall further at the official windows.
“A convergence is not necessarily to bring all the exchange rates to one rate,” Rasaq says, “but to narrow the current wide gaps in the multiple exchange rates to a point where the differential among the rates is not enough to support arbitrate or round-tripping.”