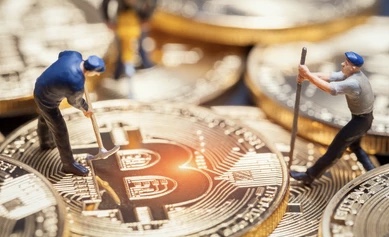 How To Mine Bitcoin

Bitcoin is created when a computer program solves a mathematical puzzle. The program that runs the calculations is called a miner. This program is connected to a network where every other miner on that network solves the same puzzle. Many people have bought hardware and programs designed to “mine” bitcoin.

This is because a miner has to perform thousands of calculations per second to solve a puzzle.

What is Bitcoin mining?

Bitcoin mining can be defined as the process by which new Bitcoins are entered into circulation and serves as a critical component of the maintenance and development of the blockchain ledger.

The number of calculations that your mining program can make per second is called hash rate. So the higher the hash rate, the more puzzles it will successfully solve. The more mysteries it solves, the more Bitcoin it earns.

Bitcoin mining can be essential and valuable as an alternative means of acquiring Bitcoin. For some people, buying Bitcoin with fiat currency on a cryptocurrency exchange is the easiest and fastest way of investing in Bitcoin. But for more sophisticated investors, Bitcoin mining may lead to higher profits.

How To Choose Bitcoin Miner

Operational, the Bitcoin network only wants to create new Bitcoins every ten minutes.

This means that it only wants someone to make it again every ten minutes. But the more miners try to solve the puzzle, the more the chance of solving it by someone increases.

The Bitcoin network adapts to this by making the puzzle harder to solve.

This is done by adjusting a numerical value that is part of the puzzle, called the difficulty.

Mining equipment consumes much power, so electricity bills can rise when it is used. Slower equipment creates more power consumption that must be paid for and then decreases your chances of winning.

In the last few years, the difficulty in generating Bitcoin using computing power has risen exponentially, thanks to the increasing popularity of the digital currency and the step forward in computing power afforded by mining equipment.

This idea has made Bitcoin mining very undemocratic. Nevertheless, as the potential profit appears, people began investing vast amounts in Bitcoin mining equipment. Interestingly, some companies have even set up entire racks full of powerful computers designed to mine Bitcoin.

So the steady rise in the difficulty is a function of more people trying to mine for Bitcoin. The rising problem is bad for miners because it reduces everyone’s chances of winning making gains.

2. Know The Costs Of Mining

A considerable amount of cash is involved in buying more powerful miners.

Some professionally built miners that can calculate over 100 terahashes per second can cost up to $15,000, and it might take close to a year to begin seeing a return on your investment.

Others are less expensive but come with less computational power, which means minor puzzle solving. So this makes it very difficult for someone who is just entering the Bitcoin space to become established and see any actual returns within a short time.

How To Mine Bitcoin

1. Get A Bitcoin Mining Rig

It is more for you to own a mining rig before starting to mine Bitcoin. Although miners used ordinary domestic computers and graphic cards in the early days of Bitcoin today, a small amount of bitcoin was mined with these machines.

Most recently, Bitcoins are mined by special hardware designed just for mining Bitcoins or other digital currencies based on the same algorithm.

These are called Application-Specific Integrated Circuit chips (ASIC) and use less energy and mines Bitcoins much faster. This device is expensive, and its manufacturing is time-consuming, but its speed is fast.

The most powerful machines can solve as many as 14 terahashes per second, which means it makes 1012 attempts to solve a block-per-second with constant development.

The following parameters are essential to be selected and followed by new Bitcoin miners: performance (hash rate), consumption of electric power, and price. Hash rate is an indicator for the number of attempts to solve a block per second.

Also, it is crucial to go through various miners’ reviews and choose the one which appears with the most benefits to you. Do not practically choose according to price—concentrate on the overall proportion of price, performance, and consumption.

Keep in mind that getting these devices could be difficult nowadays because the demand is exceptionally high.

Before deciding to buy an ASIC miner, make sure to calculate the profitability of the chosen device in an online calculator.

Apart from the parameters of your mining rig, the calculation also includes

the price of electricity,

fees from the mining pool, or

This will enable you to know whether mining can be profitable or how much money you have to invest in the beginning.

The Place For The Machine

Bitcoin mining demands are limited to adequate electric power and a special place for a machine, as mining rigs are noisy and emit much heat. The service miner housing solves this problem. You can be placed into a professional data center and get rid of all these concerns.

The Quantity Of Energy Used

A decentralized ledger of Bitcoin transactions, known as a blockchain, and new entries in that ledger are created when someone or their computer solves a complex mathematical puzzle to verify previous transactions.

A significant payout characterizes this. If one of those puzzles is solved, you get to process the next block in that massive ledger and earn yourself, or “mine,” 6.25 bitcoins, which is today worth about $230,000 with any transaction fees, a tremendous amount of computing power is required to run the superfast machines that solve these math problems and cool them when they overheat.

But with Bitcoin miners located all over the world, the overall energy bill is high.

According to the Cambridge Bitcoin Electricity Consumption Index, worldwide Bitcoin mining uses about 105 terawatt-hours per year.

This is more than all of the electricity used annually in the Philippines, the university estimates.

Using geothermal energy like the one planned to be used in El Salvador, the hot volcano heats water underground, creating a rush of powerful steam that can spin turbines and generate electricity.

Recall that El Salvador’s new law makes Bitcoin legal tender, joining the US dollar as the only other official currency in the country.

2. Get A Bitcoin Wallet

For each Bitcoin address, there is a form of a public key and a matching private key. The public key contains a unique combination of characters.

It works basically like a bank account number, so you have to tell him your public key if you want to receive Bitcoins from somebody. Every Bitcoin address is shared, and you can trace back every transaction that passed through it.

There are different wallets, from straightforward online wallets, software ones, to the most secure hardware and paper wallets. Each wallet has its advantages and disadvantages, as some can keep multiple currencies at the same time.

The Best Bitcoin Wallet For Beginners

A software wallet is considered the best option for starting miners. It is secure but still easy to manage and suitable for frequent manipulation with mined currency. In addition, you can easily download a wallet to your computer, where your coins will be stored and become inaccessible to people.

There are two kinds of software wallets: full ones that download the whole Blockchain or lightweight ones which store only actual transactions. The first option requires a lot of space and memory in your computer but is safer, while the light variant is connected with Blockchain managed by a third party and is not fully controlled by you.

To choose a full version of the wallet, you can download the original Bitcoin Core. However, its full synchronization takes a couple of hours because the Blockchain currently is the size of tens of GBs.

Set your password to the wallet in the program, and don’t forget to save a copy of your wallet on another device. Otherwise, you will lose your coins entirely in the event of your computer failure.

Sometimes, the best ASIC miner does not guarantee to gain Bitcoin today.

This is because a single machine can’t compete with many large mining farms globally, and mining Bitcoins on your own isn’t always profitable. But there appear to be many gains when there is cooperation between miners in mining pools.

Miners provide their computing skills to a group, and when Bitcoins are mined, the gain is shared among members according to a given power. Thus, the income is lower but regular.

But members of a pool have to pay a fee to an operator. The price of payments is usually between 0-2% of the received reward.

It is recommended for beginners to try Slush Pool, the first pool in existence and considered one of the most credible ones. Slush Pool was founded by a Czech programmer Marek Palatinus.

You get registered on its website immediately; you choose a mining pool and then receive a worker ID for your miner.

Some cryptocurrency pools focus on one virtual currency, like Bitcoin, while others move around mining different coins based on which one they think is most profitable at the time. Various factors are used to decide this, including the pool’s hash rate at the time and the rate of exchange between different coins.

Some mining pools can combine Cloud-based mining and pooled activity. This means you can pay for an online mining contract automatically woven into the pool instead of buying mining equipment.

This reduces your capital flow, but you will have to pay for your mining capability from your pool profits.

Pools can payout in various ways. Some pay participants immediately based on every share that they successfully submit. A share can be described as an excellent piece of the mathematical puzzle that has been solved.

This exposes the mining pool operator to more risks because shares may be earned even if the whole puzzle is not solved. As a result, the operator may payout rewards for claims even if they don’t make a reward from the Blockchain.

Commonly, pools pay using a proportional model, in which the reward is distributed only when the collection successfully solves the whole puzzle.

4. Get A Mining Program On Your Computer

Here, you get to have a mining client running on your computer after you’ve got your hardware, a Bitcoin wallet, and chosen a mining pool.

Then, it connects you to the Blockchain and Bitcoin network. Mining software works to serve miners, collect complete results of their work and add all information back to the Blockchain. Also, Bitcoin mining software monitors miner’s activities and shows basic statistics like temperature, cooling, hash rate, and average mining speed.

Many free programs are used to mine Bitcoins, with the best programs able to run on almost all operating systems. Each of them has its advantages and disadvantages. Some mining pools also have their software.

Friendly Hash Miner is the best for beginners, as it is effortless to use mines multiple cryptocurrencies and automatically chooses an algorithm that is the most profitable in a particular moment.