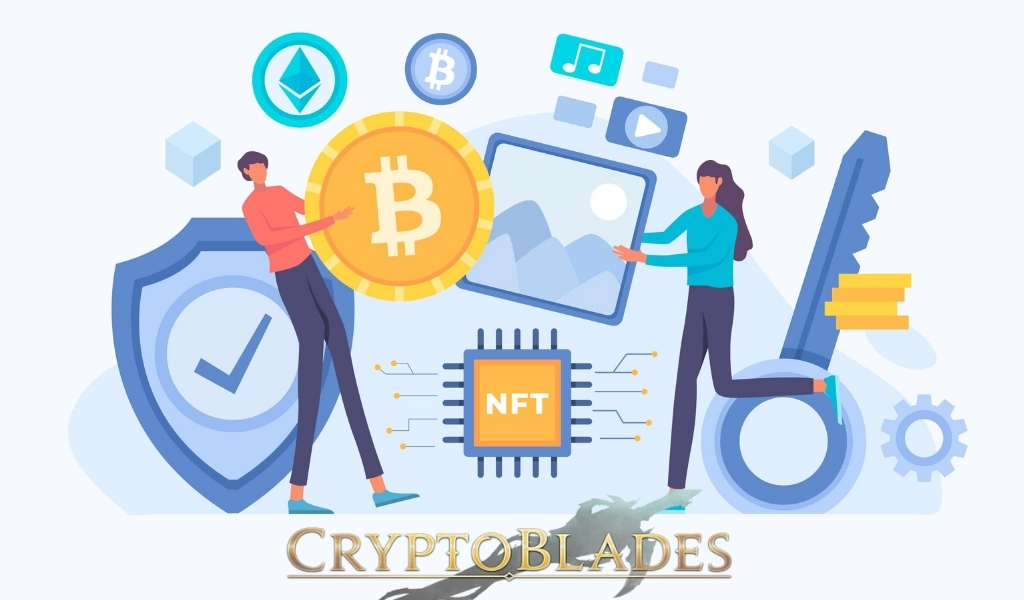 How to play CryptoBlades and Earn SKILL

This Cryptoblades review will show you that Gamified cryptocurrency has seen an increase in popularity, which continues to attract traders and investors to the cryptocurrency market.

In the past few months, cryptocurrencies offering gaming services and running gaming platforms have seen a large influx in liquidity.

These gaming cryptocurrencies often have their own tokens that gamers use as ecosystem utility tokens.

These utility tokens can also be used to create liquidity, reward players, and manage the ecosystem.

There has been some stagnation in the crypto markets, but not the volatility and fast-paced activity that it is famous for. FUD from China is responsible for this, mainly because of the ban on bitcoin mining and the crackdown on cryptocurrency trading.

These events have led to cryptocurrency markets gaining some significant activity and volatile movement. This is due to the game-themed cryptocurrencies that are mostly non-fungible tokens (NFTs).

CryptoBlades is an NFT game that allows players to earn SKILL by defeating their opponents or enemies in gaming battles.

The CryptoBlades game’s major core value is the reward of players with SKILL tokens to defeat enemies and take part in raids that are held in the game.

CryptoBlades is a web-based NFT roleplaying game. It was created on the Binance Smart Chain network (BSC).

Riveted Games is the group behind CryptoBlades NFT.

On the other side, players can choose to sell their characters or weapons on CryptoBlades’ unique marketplace.

SKILL is the native ecosystem token of the CryptoBlades NFT gaming portal, which runs on the Binance Smart Chain (BSC). The SKILL token can be used to manage the entire CryptoBlades ecosystem.

CryptoBlades is unique in that all. players must use the official CryptoBlades site to play the game. The game is web-based.

CryptoBlades NFT was created to give gamers full control over their digital assets. Gamers can earn points for winning games and help spread blockchain adoption.

The NFT marketplace in CryptoBlades allows players to sell or buy their characters, as well as other merchandise such as their manufactured weapons and more. To increase sales, players can advertise the products that they make to earn more profit.

NFT marketplace will also enhance the functionality of the SKILL ecosystem token from the CryptoBlades game environment. Because the SKILL can be used to buy and sell products on the NFT marketplace, this is possible.

CryptoBlades was created in June 2021 and aims to create a vibrant community of gamers who love gaming on the blockchain.

SKILL can be used to create and manufacture powerful weapons with high potentialities, and new characters for players. SKILL can also be used by gamers to level up their characters as they play the game and progress through the game.

Players get SKILL based on how powerful their weapons are when they defeat an opponent.

The low entry fees to CryptoBlades have attracted many gaming enthusiasts.

CryptoBlades offers unique features such as:

Oracle manages the game’s pricing system and gaming rewards. Oracle calculates the SKILL payment and its current price for players who upgrade their game or win fights with their opponents.

Oracle balances the entire CryptoBlades gaming economy. This is done to ensure that the dollar equivalent to the SKILL token is distributed at each transaction’s point.

CryptoBlades is a game that requires very little capital to play. This allows players to invest their profits on other platforms that offer long-term investment opportunities.

Participants in CryptoBlade’s gaming platform get rewarded every day when they play with a certain amount of SKILL, approximately 0.75 SKILL.

The SKILLS that players earn as rewards can’t be transferred to CryptoBlades’ NFT marketplace. This could be seen as a disadvantage to the CryptoBlades game environment.

CryptoBlades is SSL encrypted. The platform is protected by SSL encryption, which ensures high levels of security and privacy.

How to play CryptoBlades and earn SKILL

You will need certain things in order to play CryptoBlades.

You must have a computer to play CryptoBlades

Preferably, you will need a Binance Smart Chain Compatible wallet Meta Mask. Once you have set up your wallet, you will connect it to the CryptoBlades platform.

Next, ensure that you have enough Binance coin (BNB), to process transactions and pay gas fees.

You can also use the Binance coin (BNB) to purchase your SKILL, which you will need for playing or purchasing entry into the game.

You can play a game

CryptoBlades is an NFT web game. This means that you will need internet access to be able to play the game.

You will need to create a character (warrior) or forge a sword in order to enter CryptoBlades. To buy one sword and one warrior, you would need to spend 5.5 SKILL tokens.

You have the option to purchase more than one warrior to increase your chance of winning fights. Also, you can forge your swords together to make them more stringent.

Each player can have no more than 4 warriors, but they can have as many words and phrases as they want. They can also force swords together to make them stronger.

Warriors have an energy timer that regenerates every 5 minutes. With 40 stamina per fight, they can reach a maximum energy level of 200 stamina.

Once they join the game, they can earn SKILL every day. Players can participate in fights or win warriors’ earnings depending on their level and experience. Players can also earn SKILL by participating in raids.

A second way for players to gain SKILL is to sell their characters or manufactured products on CryptoBlades’ NFT marketplace.

CryptoBlade currently contains 4 elements. Each elect can conquer certain terrains or be conquered by another. Different elements are assigned to all warriors, weapons, and weapon attributes. These elements can increase or decrease your chances of winning or losing a fight in the game. These elements are:

This element conquers the earth but is defeated by water.

This element conquers lightning but is defeated by fire

This element conquers water but is conquered earth

This element conquers fire but is defeated by lightning.

CryptoBlades is a game that is played on-chain. Players have their own NFTS, which they can trade at any time.

With the many features on the website, it seems like there are endless Capabilities within the CryptoBlades ecosystem for blockchain gaming.

SKILL, the native cryptocurrency of CryptoBlades, is used to play the game as well as perform other ecosystem functions. As the CryptoBlade ecosystem grows, more uses for the SKILL will be created to manage the gaming economy on the blockchain. The following are the current uses of the SKILL:

Gaming SKILL refers to the SKILL that can be used only within the Crypto Blade game. It can only be used for reforging, minting weapons, and forging.

The gaming fund SKILL cannot be transferred to the market for the purchase of NFTS or other things.

Future developments and upgrades may allow the gaming funds SKILL to be used outside of the in-game environment.

SKILL is extensively used in the minting characters of all types, as characters are a major source for NFTs within the CryptoBlades ecosystem.

Characters are the NFTs that are most important in battles. They are also the CryptoBlades’ combat warriors. With fights and victories in battles, characters become more valuable.

Players spend SKILL on creating characters, which is a large portion of the money used to settle battle winners’ payments.

These characters use weapons to fight on CryptoBlades games in order to earn SKILL.

The SKILL from the Minting of weapons is completely used for settlements. As the SILK are sent at the payment settlement contract address, the SKILL is also used to pay the SILK.

SKILL is used to transform a weapon into another weapon during reforging. This increases the stats of the reforged weapons and increases the weapon’s value after reforging.

When they have enough weapons, players will often use the reforging function. To increase the statistics of weapons with low ratings.

The SKILL from reforging weapons gets sent completely to the address in the payment settlement contract. It is used for settling fight payments.

Staking of SKILL is a staking process that takes place on the SKILL-for-SKILL staking pools. Players and users can stake their SKILLs in a SKILL staking group to receive rewards in SKILL at end of the staking period.

The lock period for the staking poll lasts seven days. After that, the staked SKILL owners receive their rewards in SKILL.

After the staking period, withdrawal of SKILL from your MetaMask account is free and without tax.

The SKILL staking program helps players avoid paying any tax if they withdraw from their wallets during the period of staking.

The lock timer will reset if any amount of SKILL was withdrawn from the staking pools during the lock period and the count of the days would start afresh. Players can increase their staking by using this method. They will not be locked out for seven days.

CryptoBlades NFT blockchain gaming platform has been a great success, with a lot of interest in a short time.

If you like games and challenges, the NFT gaming platform is something you should check out.

This article does not constitute financial advice. Please do your research.